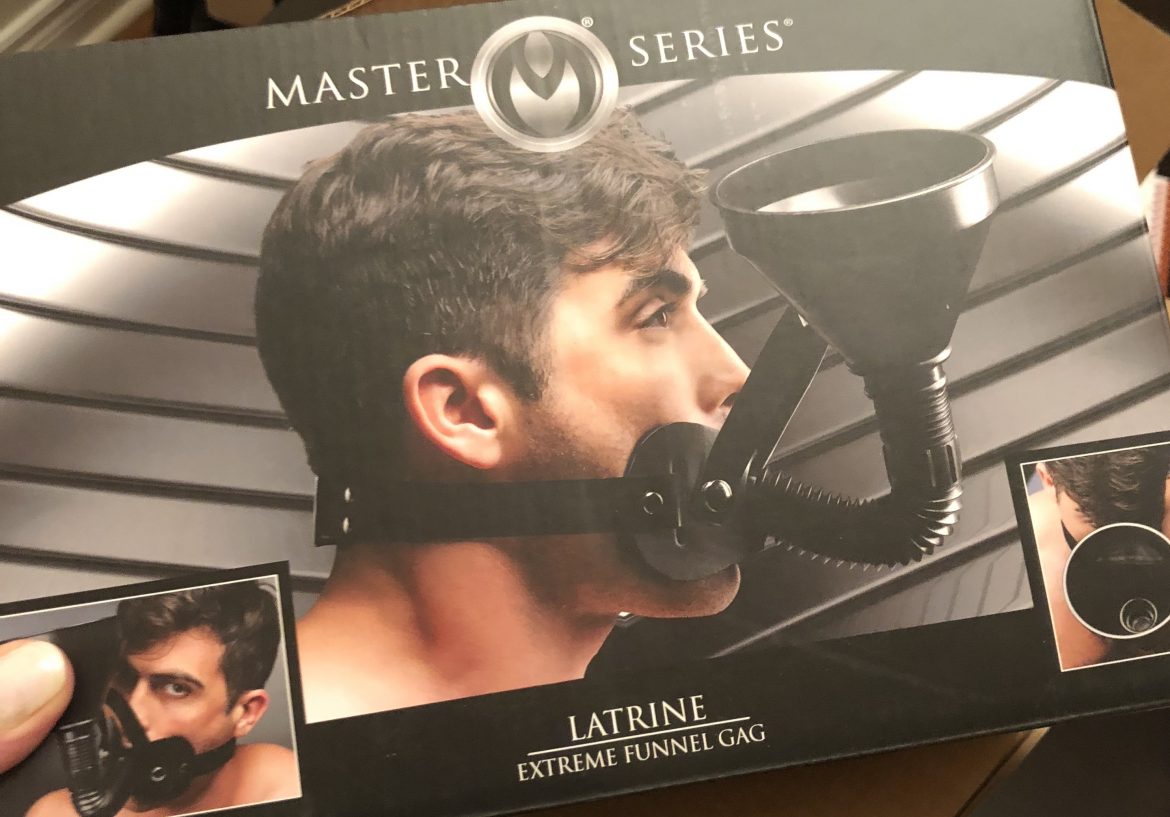 I was all ready to post my next ball busting blog post (keep an eye out for it over the next little while!!), but a recent purchase and accompanying session inspired me so much I had to interrupt myself!

As regular readers will already know, one of my all time favourite kinky passions is golden play. I have a virtual stable of devoted subs who adore consuming my golden nectar, and I’m always looking for new ways to heighten the experience. For one of my favourites, H, I decided I wanted to do something more forceful – I had a sudden vision of him on his knees, hands bound behind his back, forced to consume my piss until I decided he’d had enough. Now, when I have ideas like this I move heaven and earth to make them happen, but thankfully that wasn’t necessary in this case!

I hopped over to Amazon and found myself this delightful toy. It has a flexible hose and a removable mouthpiece for easy cleaning. It buckles behind the head to keep it firmly in place. I placed it on my Amazon Wishlist immediately and gave H a nudge in that direction via my Spoil Me page. Always striving to make his Mistress Happy, H ordered it (and a few other things!) right away, and we set a date for the next day.

When H arrived, I led him out to the back deck to enjoy a drink. It was a beautiful day – the sun was finally shining and we enjoyed catching up while he worshipped my feet over iced tea. Fairly soon, though, I decided I could no longer wait, and from the bulge in H’s pants I deduced that he was feeling the same way. Chugging the rest of my drink and pouring another one for the trip, I took him inside and led him down into my play space. He was so eager, he was practically shedding his clothes on the stairs. Ever the polite sub, when we approached the door, he knelt and asked to be allowed to kiss my feet. I consented, and he spent a while lavishing them with attention while I got everything ready.

Once I had H stripped down, I brought out my lovely new funnel gag. His eyes lit up as I explained what I had in store for him. I could tell he was desperate to get started – it had been a long week since he had last consumed my nectar, and I knew that the idea of being forced to drink as much of it as he could turned him on immensely as his hand drifted down to stroke his rock hard cock. Grabbing my favourite crop, I gave his hand a sharp tap, reminding him that he needed to ask permission before he was allowed to pleasure himself. He opened his mouth to apologize, and instead I surprised him by jamming the funnel gag in deep, making sure the hole was situated at the back of his throat, and buckling it in place.

My darling slave had been begging for my delicious piss all week, and I had decided to teach him a lesson. I had been keeping myself hydrated and storing my golden nectar in several large bottles in the downstairs fridge. I had brought them out a few hours earlier to allow them to come to room temperature. I was going to make him learn to be careful what he wished for.

I explained this to him as I squeezed and pinched his nipples, kneeling down so that we were eye to eye. His eyes fluttered closed at my touch and I laughed, tilting the first bottle such that my pungent yellow liquid started to fill the funnel. Slave H shuddered and choked, reaching up to tug on the gag as the piss started to fill his throat. Well, that wouldn’t do. I retrieved some thick leather cuffs from my bureau and secured his hands behind his back. I assured him if he was a good boy and drank everything I gave him, he’d be rewarded.

For the next hour and a half, I nearly drowned my sub in piss, while amusing myself with the rest of his body and delighting in his muffled sounds of agony and pleasure from behind the gag. Indeed, he did me proud and swallowed everything I gave him. I was impressed, and certain he’d enjoy what I had planned for him.

I slid my hands up my thick, creamy thighs, sliding my skirt up as I went to reveal exquisite, lacy dark red panties spread over my smooth flesh. I could hear his appreciation, and I wandered behind him, undoing the cuffs and allowing him to start stroking his cock, which was purple and straining after over an hour of teasing. He shuddered as my hands went back to my panties, stroking the soft lace and assuring him he’d done well today. Slowly, tantalizingly, I pushed the panties to the side the slightest bit, and adjusted my stance so that I was positioned directly over the funnel. Just being this close was enough to push him to the edge, but I told him to hold off.

I wish I could describe the look on his face when my fresh, warm golden nectar started flowing. I can tell you he came almost immediately, stroking his cock and shuddering in ecstasy. I can tell you he tried to thank me through a mouthful of piss and we both laughed. I can tell you all of this, but why not experience it for yourself? If you’re a golden fan, the funnel gag is a must. Contact me today to book your session!