The Strongest St. Andrews cross in the GTA – maybe Canada? 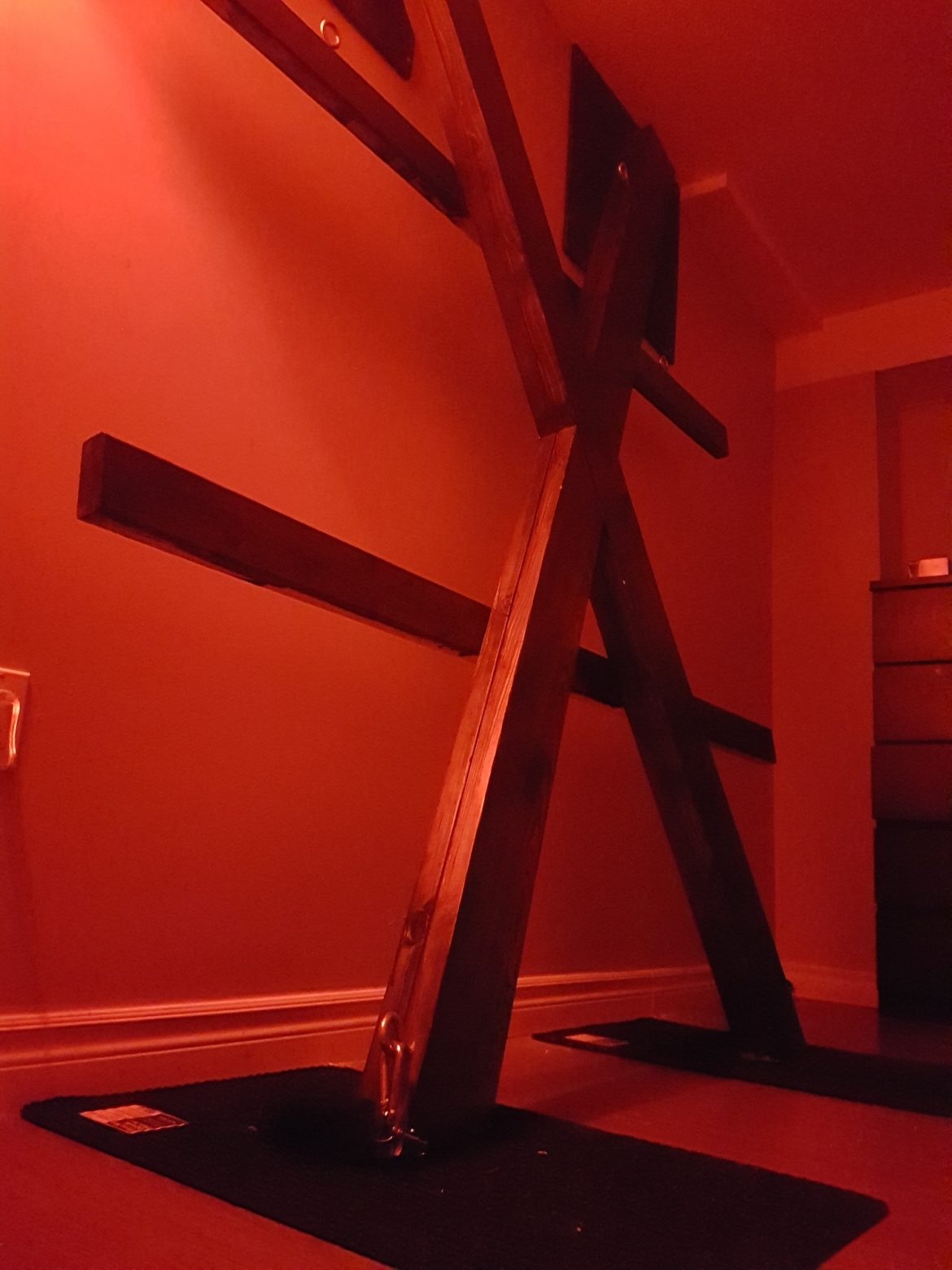 As my last blog was a bit more about scheduling than seduction, I was inspired today to talk about my favourite piece of furniture in my dungeon-in-progress – my custom built St. Andrew’s Cross!

There’s a reason why I’ve boldly asserted that I have the strongest St. Andrew’s cross in the GTA – possibly Ontario – maybe even Canada! I’m sure the experienced among you have seen the commercially available crosses on the market. I’ve owned a few of them myself! I find them to be attractive, but fairly flimsy. Since I specialize in fairly exquisite torment and torture with subs of all shapes and sizes, I really needed something that was going to stand up to a lot!

Like my subs, this cross can take a beating! Not only is it double the usual thickness, it’s also chained to studs in my wall. I have personally attached over 600 pounds of weight to the cross, and while it’s designed to move, it doesn’t budge. That’s the other thing – my cross is designed to swing out from the wall with the right pressure, leaving the sub dangling a bit forward. It’s a unique position for sure, and adds delightfully to the feeling of helplessness!

One of my first sessions on the master cross was with a sub who is over 400 pounds and 6’7. With his permission, I’m sharing some details of that session with you today, so that you can get an idea of just how much punishment this thing can take!

J joined me in my dungeon, practically vibrating with anticipation. He had never found a St. Andrew’s cross that could hold his frame, but as a true bondage junkie, he’d been dying to try one for years. I decided to have one built, as I’d met quite a few people in J’s position. I encouraged my kinky craftsman to go all out, and he didn’t disappoint!

I could feel J’s legs start to tremble as I strapped his nude body to the cross. My leather cuffs circled his wrists and ankles – even for him, the legs were spread quite wide, which was perfect for our session. I gave him a quick kick to the balls to start off – he lives for this kind of torture.

Over the next two hours, I alternately teased and beat him mercilessly. I could see the exquisite combination of agony and ecstasy on his face. The groans reached a pitch and intensity I had never before heard from him.

I did my usual check in about fifteen minutes before our session was over, and he encouraged me to really go for it – he wanted some extreme ball torture! Of course I was game for a good ballbusting, so I grabbed my wooden cane and got to work. His yelps urging me on, I struck until his knees buckled and we both tensed as he fell towards me. Suddenly, with a jerk, the chains attaching the cross to the wall pulled taut, and stopped his fall in its tracks. I stood there, breathing heavily, as J looked at me with wide eyes and spontaneously orgasmed! The way he tells it, the rush of adrenaline pushed him over the edge he was already on, and he couldn’t help himself. It’s pretty rare to make a man cum without touching his cock… and of course, he was sorely punished for it later!

If you’re interested in being securely, safely bound to a cross that will definitely hold you, do let me know! I welcome those of all shapes, sizes, experience levels, and abilities – more on that later!